Smoking and BBQ has turned into somewhat of a regional cultural thing.  While smoked foods are eaten all over the country, in the Eastern United States from Texas to Carolina smoking/BBQ is a “Thing.”

The Difference Between BBQ/Smoking and Grilling

Grilling is the application of direct high heat, for such things as Steaks and burgers, shrimp and Lobster seafood, and others.  Smoking is the application of a lower heat, indirectly with the addition of smoke.  The goal of this is twofold, the smoking acts as a flavoring agent, and can act as a preservation method as well.  The salmon pictured above gives you a good view of the smoke that surrounds a smoked or slow cooked item, while the artichokes below show you the quick cooking involved with grilling vegetables or a steak.

What is BBQ and Smoking

Well neither BBQ nor smoking is really that complicated.  It began as a way of preserving products, smoked fish and meats are primarily the focus. It is brined then it could be dried with smoke as part of the process, which was likely the original version  of what the goal was.  Preserving meats through the winter and slower hunting times.

It is the act of cooking something slowly, where adding smoke and seasoning (dry rub or brine) adds flavor and over time the product reaches a temperature that will break down the tough tissue if it exists. This tender product is now filled with all kinds of flavor from smoke, seasoning and the product itself.

The Smoking process introduces something like 200 chemicals in the process of smoking.  The toxins released inhibit the formation of microbes. This is what does the preservation of the smoked food.  Smoking also helps to reduce the oxidation of fats.

Seasoning is the addition of spices and flavors in the form of dry rubs, brine and spices.  Flavorings are often bolder because of the strong smoke flavors introduced during the smoking/cooking process.

Seasoning is also done through the cooking process, flavors are added through the addition of smoke and heat.  Smoke adds the distinct flavors from the woods used.  The dry heat changes the external texture while maillard browning, which is the result of sugars and protein being exposed to high heat, affects the flavor of the meat as well.

Finishing is the final process done before finishing a cooking process that gives final appearances and glaze.  You may marinate or brine chicken, smoke it or cook on the grill or in the oven.  If you had marinated in BBQ sauce mixture, it would be a dull in color and luster.  Ribs may be seasoned with a dry rub, cooked, they can be eaten with no BBQ.

Finishing a BBQ chicken dish would be done by brushing a BBQ sauce to the chicken within the final 20 – 30 minutes of cooking at 375 to 400 degrees or on a grill of high heat.  This will allow the seasoned meat by the marinade to be enhanced by the BBQ sauce that adheres to it.  It will gloss up by the caramelization of sugars, and a creating a glossy finish.  This makes for an appealing visual of the chicken, as well as a great tasting BBQ Chicken.

Finishing ribs would be similar as with the process for finishing chicken. If your end product doesn’t include using BBQ then you would merely finish grilling your cooked ribs on the grill, which would give you a deep bark texture with less sweetness.

If you are going to finish your ribs with BBQ sauce then take your smoked ribs, baste with BBQ sauce, expose to high heat, either on the grill, in the oven, or high heat in your smoker.  Your aim is to caramelize the sugars, without burning them.

Use a ratio, which means use the same measuring utensil  for each ingredient multiplied by the number.  Ex. 1 = 1 Tablespoon, 2 = 2 Tablespoons, or cup, quart or gallon depending on how much you are making. 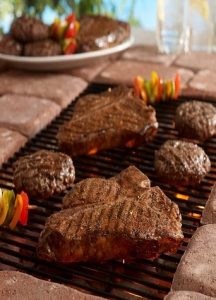